I’ve never written about having ADHD.

While it’s a huge part of who I am, I don’t give it that much thought anymore. It’s not an easy subject to write about, especially as a 40-year-old mother of three, but I’m taking a deep breath and going for it.

I was diagnosed with ADHD at the age of 32…

…even though I think that deep down, I always knew I had it. It turns out that women often go undiagnosed until they become mothers (if at all), mainly because ADHD is associated with young boys. As females, we are conditioned from a young age to be people pleasers. This means that we do everything we possibly can to hide our symptoms. When we hit motherhood with all of its wonders and related stress, the symptoms become increasingly harder to hide. 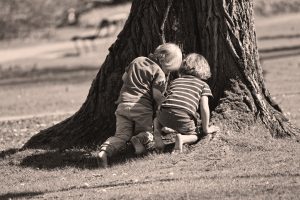 I didn’t know this. Almost everyone in my family has ADD or ADHD, but it seemed like I was lucky and it had skipped over me. The main reason I believed this is that I sailed through high school, and ADHD doesn’t go hand-in-hand with excelling at school, right?

I remember always feeling like I had swallowed a volcano that was about to explode, and this feeling just intensified as I got older.

Then I failed algebra during my first year of university. Algebra had always been a subject that came quickly to me, but suddenly, I had no idea what the professor was talking about during class. I think the stress of putting myself through university, together with other things that were going on in my life at the time, made it much harder for me to process things like I used to. It was the first time I had ever failed anything, and it was a massive blow to my self-confidence. Still, I pushed through, retook the course and passed, and graduated three years later with relatively high grades.

I worked in office jobs that required high levels of concentration. As a result of my ADHD (which I hadn’t realized I had yet), I learned to work fast because if something took me too long, I felt like I would lose my mind. Working a 9-5 job felt like torture at the best of times, and I’d come home exhausted every single night. Still, I thought I was just the kind of person who got bored quickly and needed to change jobs relatively often. It again didn’t occur to me that I had ADHD. (Read about the 7 Signs of ADHD You might miss!)
And then I had kids…

For me, the wake-up call came after I had children.

My first daughter was born when I was 29, and I loved being a mom from the first moment. However, I woke up every morning of my maternity leave wondering how I’d make it through the day. My daughter was born small even though she wasn’t premature, and we spent her first year at check-ups to closely monitor her growth. I had a tough time keeping track of everything and found myself obsessing over the logistics and scheduling to try and get my head around it all.
As she got older, I found it practically impossible to read her a book or sit and play games with her. I also found it increasingly hard to follow recipes, hang up or fold laundry or do a lot of the other tasks that come with being a mom.
It was then that I finally realized I might have what’s referred to as atypical ADHD – the kind that often goes undiagnosed because you just don’t fit the typical definition. But still, I didn’t do anything about it. (Read about How Author Lacy Estelle Naturally Combats her’s and her Son’s ADHD!) 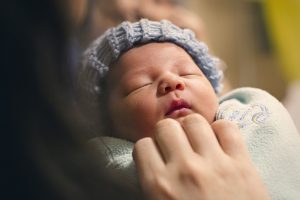 My second bundle of joy was born. It was a rough birth, and I thought my heightened level of anxiety was because of that. But then I started reading about the symptoms of ADHD in adult women, and something clicked. It was as if it was written about me.
The next step was making an appointment for a formal evaluation, which I did. I was asked to complete out a questionnaire, and my husband had to complete the same one for me. It was as if we were writing about two completely different people, which was kind of shocking to me because it meant I had done an excellent job of hiding my struggle (or that my husband hadn’t noticed my effort).

Either way, the results were precise and my psychiatrist confirmed what I already knew – I had ADHD.

I gave myself some time to decide whether to take medication or carry on the way I had been and after much thought, decided to try a relatively low dose of Concerta. I’m still on it, and together with some organizational strategies and tactics, I manage the symptoms, but it’s a struggle, especially when I’m stressed. (How to Organize Your Life (or Anything) When you have ADHD)

What happens when a mom with ADHD has a child with sensory processing issues?

When my second daughter was about two, I noticed she had some irregular behavioral patterns and was very anxious. At kindergarten, she was withdrawn and quiet, but then she’d come home and let it all out and have daily meltdowns. She also developed phobias of specific things like balloons and hand-drying machines in public toilets. When she was three-and-a-half, we took her to an occupational therapist who confirmed she had significant sensory processing issues and was very sensitive to visual stimulation and sounds.

These sensory issues can also be a symptom of ADHD.

I felt like every visit to the occupational therapist was at much for me as it was for my daughter. My husband, who has neither ADHD nor sensory issues, found it a little harder to understand what all the fuss was about, but for me, it all made a lot of sense.
As a result of her sensory issues, she also has tics, some of which are vocal. As I’ve already shared a lot of personal things in this post, I have to be honest and say that this. For me, these are like Chinese torture. I’m supposed to ignore them until they go away. They last for a few months each time and these are my more stressful periods of motherhood. It takes every inch of restraint in my body to keep calm and it doesn’t always work.

As moms, we face these crazy and unrealistic expectations…

and are expected to be walking and talking schedules. We need to know when every extracurricular activity is. Schedule doctor appointments and then remember them. Sign forms, make sure there are structure and routine at home, and so on and so on! For me, this is the hardest part of being a mom. I wish I could say that my husband shares all of these responsibilities with me equally. Unfortunately, the world still has a long way to go before we get to that stage. For now, we’re still expected to stay in control and on top of everything. When we don’t, we often feel like we’re failing as mothers. (How to Embrace Failure and Start Over!) 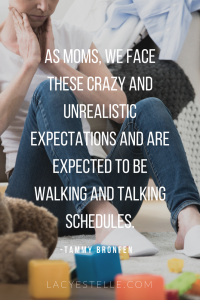 I’ve since had my third child, and he has the advantage of having a somewhat calmer mom. Sometimes I feel in control and on top of things. Then something shifts and things turn upside down again for a while before I regain my focus.

What I’ve learned since my diagnosis of ADHD:

My point, life is messy. Motherhood is messy, especially with ADHD. We have this fantasy about being the perfect mothers to the perfect kids, but it’s all just a fantasy. The beauty lies in the messiness. In the small pockets of clarity and joy that shine and sparkle inside the mess. 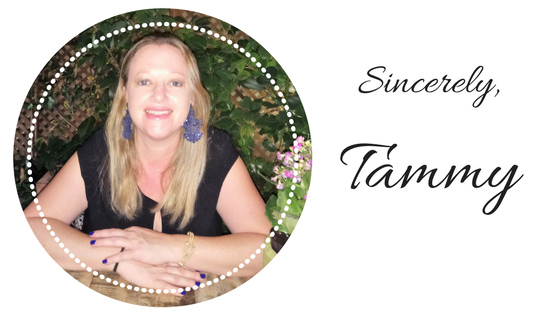 Tammy Bronfen is a freelance content marketing manager and writer and the owner of One Day, a blog about one day in the life of different women around the world. In addition to writing about women, she also writes on finding balance in our daily lives, parenting, and more. You can follow her on Facebook, Pinterest, Twitter, and Instagram.